More Places To Find Me

There Are No Words For That

What can I say that hasn’t been said? That the voices of thousands of fallen soldiers don't already speak from the grave. That I can’t describe with lines of flag-draped coffins, secured in the back of military aircraft. That I can’t read about on the headstones of Private First Class John Smith or Airman First Class Jane Doe. That I can’t count in the paced footsteps of guards, through rain and snow and summer heat in front of the Unknown Soldier’s tomb. 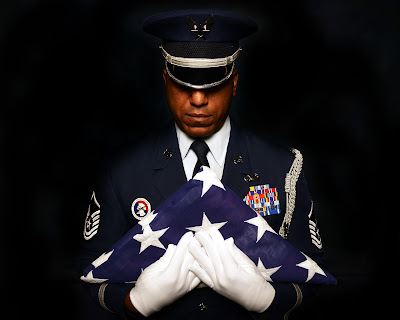 My words are but pale imitations of the real thing. Of a kid sent to Vietnam, age nineteen, trembling in his boots. Of a mom, finding out he won’t come home and clinging to an old baseball trophy. Of a dad, trying stoically not to cry, but be strong when his heart is breaking. Of a wife, with two kids, who look like their father, but won’t know or barely remember him twenty years from now.

The best thing I could say is, in fact, to say nothing at all. To, instead, show respect in my actions. To live each day with my priorities straight, knowing that nothing I can do will ever compare to that. To hold my chin up when the storms of life beat against me and survive. To always place my hand over my heart in Pledge of Allegiance to more than the flag of a nation, but to the soldiers who secured its stripes. Who founded each brick, each building, each political office, the football stadium, the corner drugstore, and a million houses in suburbia … all created from the blood of people far better than myself. 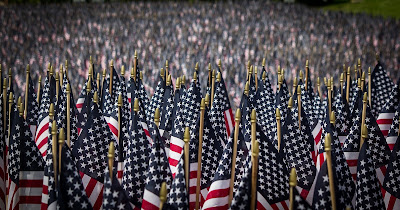 After all, I haven’t walked, knee-deep, in jungle morass, wondering where the enemy hides. I haven’t suffered desert heat, eating blowing sand, fearing that sweet-looking local woman actually plots my death. I didn’t feel the tear of a bullet or mortar round enter my flesh, thousands of miles from home. Nor shout for my mother in the darkness, which slowly steals my mind.

My life is a weak thread amongst a tapestry of much stronger ones, men and women of steel, who treated the cause as greater than their future. And wore the ultimate form of dedication, with their iron-clad sacrifices, securing the freedom of a woman, who’s written a handful of books some people liked and others, not so much.

There are no words for that. Not on Memorial Day or any other day of the year. Though, I suppose if I were to create them, I couldn’t speak them better than Ol’ Abe:

“But, in a larger sense, we can not dedicate — we can not consecrate — we can not hallow — this ground. The brave men, living and dead, who struggled here, have consecrated it, far above our poor power to add or detract. The world will little note, nor long remember what we say here, but it can never forget what they did here.” – Gettysburg Address, 1864


Never. Their deaths assured us of that.

The Lord showed me a picture, and I wrote it as a poetic bit . But in summary, He said it isn't enough to walk through the valley of t...

Other Sites To Visit